Bonsly was a very unexpected love for me. All it took was watching the 8th Pokemon movie, Lucario and the Mystery of Mew. I thought he was one of the cutest things ever and couldn't get enough of him. Though because I've only seen him in the movie I mispronounce his name like they do there. :P I think it sounds cuter.

Unfortunately for me, Bonsly has a tad too much merchandise for me to collect as seriously as Politoed so I'm not going to own everything. But I will get lots of my beloved sadtrees! When my Politoed collection is more or less "complete" I'll probably focus on him specifically a lot more. :) 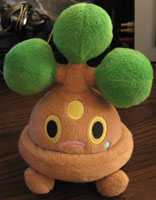 Maker: Banpresto
Size: 7.5in / 19cm
Year: 2007
_
Banpresto UFO plush can only be found in crane game machines in Japan for a limited time.

It took a while for me to find this cutie, but I finally got my hands on one and I regret nothing. (Especially since I got him in a fantastic deal from a Bonsly lot split between myself and two other Pokemon Collectors members.) He has no hang tag, but he's got his tush tag, and is in nice condition overall. The round black dot on his bottom (the drain hole for Bonsly's plant pot) was falling off but a dab of glue fixed that. While he's not a huge plush, he actually has some nice weight to him, which makes him feel extra cuddly. He's my biggest UFO out of the three that I own. 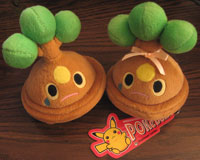 Maker: Pokemon Center
Size: 6in / 15cm
Year: 2005
_
Pokedolls are a unique line of small Pokemon plush distributed in both Asia and America. Their "chibi-fied" design is massively popular and there have been many Pokedolls made for many Pokemon. There are minor differences between the Japanese and U.S. releases, leading many completionist collectors to get one of each different release.

I call these my twins. The one on the left is the Japanese release (named Snowdrop) and he has only a tush tag, while the one on the right is the US release (named Camellia) and she has both a tush tag and an attached hang tag. I put a pink bow on Camellia because she's girlish, and I named them after flowers. Both are velboa, as Bonsly never got the minky treatment, and are in great condition. 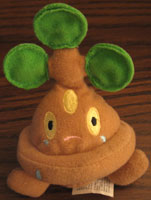 Maker: Jakks Pacific
Size: 4.5in / 10.5cm
Year: 2007
Jakks Pacific are an American company whose products are commonly sold through Toys"R"Us and other stores. They also make this sort of "sub-series" of plush called Throw Ball plush, which are essentially smaller replicas of their regular line of Pokemon plush. They come packaged with a Pokeball that you can put the plush inside and supposedly throw it to release the plush. (Never seen the Pokeball myself so I don't know the mechanism or if it works well.)

I found this poor fellow unexpectedly on the Pokemon community and he still has his tush tag, although he wasn't brand new so he has no Pokeball home to speak of. Jakks wasn't terribly friendly in designing little Bonsly.

Maker: Banpresto
Size: 7in / 18cm
Year: 2005
Presumably another release of a UFO Catcher plush. There are quite a few Bonsly plush that are labelled with the same UFO name and made by Banpresto, so I can only assume they made different ones for a while due to the popularity from the 8th movie. I'm just happy he's happy!

Maker: Banpresto
Size: 6.5in / 16cm
Year: 2005
I really don't know much about this fellow, though he has a UFO string so he may have been a UFO prize! The origins of mine can only be traced back to Y!J and he's seen better days. His leaves are a bit raggedy and there's a small stain on his forehead spot I want to see about removing. He seems to be made of terrycloth, and he's quite cute.

Maker: Jakks Pacific
Size: 3in / 8cm
Year: 2007
Along with their plush lines, Jakks Pacific made a select few large scale figures. I mostly see Gen IV Pokemon figures from them so I'm really not sure if they made figures from other generations. Though they often have a "derpy" look to them (many Bonsly figures in particular often have their pupils painted on crookedly) I'm actually really fond of them. They're really large figures compared to the usual Pokemon ones!

Maker: Bandai
Size: 2in / 5cm
Year: 2005, 2007
Kids are a series of hollow finger puppet figures made of soft vinyl and sold in Japan with candy and a sticker.

A trio of Bonsly Kids! Now I'm only missing the two clear variants. The middle one is an Attack Kid, while the other one on the right is a Movie Kid (I think). I'm not really sure why they made a new one in 2007, which is the leftmost Kid, but hey, not complaining.

Maker: TOMY
Size: 1in / 3cm
Year: 2003-2005
Chocoball (or Ball Choco) figures are small Pokemon toys that come packaged inside a hollow chocolate Pokeball, similar to a Kinder Surprise, if you're familiar with those. They feature Pokemon in dynamic poses with detailed bases that have an indent or groove in the shape of the Pokemon's footprint. For this reason they're also often called footprint figures.

I originally had only the baseless figure, which I bought without knowing what it was. Later I was gifted a second one complete with base from the very sweet hebitheivan. :)

Maker: Kaiyodo
Size: 2in / 5cm
(incl. base)
Year: 2005
I'm not really sure about the origins of this figure. I know some come packaged with certain tins for Pokemon TCG, whereas some others in an anniversary set were sold at Japanese 7-11 stores. I received this Bonsly as a gift from hebitheivan along with the Footprint Figure. <3

Size: 2in / 5cm
Year: 2008
This is a European exclusive figure similar to the Chocoball Figures, though it was packaged with candy instead of inside chocolate. Both candy and toy were sealed in a Pokeball of various colours along with a paper insert showing the rest of the figures in the series.
(Thank you for the information, lulupin!)

Size: 1.5in / 3.5cm
Year: 2008
These two are European pencil topper figures. They were random toys packaged inside a hollow chocolate ball, also similar to a Kinder Surprise. Other figures included in the set are Budew, Mime Jr., Piplup, Chimchar, Turtwig, Happiny, Munchlax, Chingling, Manaphy, and two different Pikachus.
(Thank you for the information, lulupin!)

I have two as I bought one and was gifted another from the very sweet rhys107! <3

Maker: Bandai?
Size: 1.5in / 3cm
Though I'm not certain, since the other pencil toppers are European I feel somewhat confident in guessing this one's a Japanese release. It's cute, albeit very sad! I tend to feel really bad when the poor thing is sitting in a puddle of tears, haha.

Size: 1.5in / 3cm (Bonsly)
1.5in / 3.5cm (Pokeball)
These are from a set of spinning top toys, possibly from a capsule machine. The Pokeballs open up to reveal a peg on the bottom half which you stick the Pokemon onto, and then you spin the Pokeball at the same time as another similar toy and see who outlasts or defeats the other. I can't make it work, though... XD 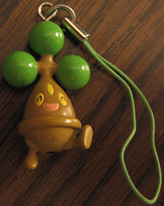 Size: 1.5in / 4cm (excl. strap)
All I really know about this is that it looks to be a gashapon cell phone strap. It is a super happy Bonsly so I had to have it at all costs. I figure it was probably part of the eighth movie promotions. 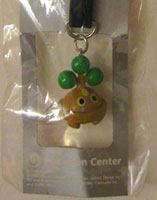 Maker: Pokemon Center
Size: 7in / 18cm
(strap incl. charm)
1.5in / 3cm
(charm only)
Year: 2005
_
I don't know much about this, except that it's a Pokemon Center strap and uses the same mold as Bonsly's Pokedoll figure. I love this strap! Click the photo to see the full image, strap included.

Maker: Pokemon
Center
Size: 1.5in / 4cm
(incl. clasp)
Year: 2011-2012
_
This charm is from the promotion the Pokemon Center held from December 2011 to February 2012, which featured a brand new charm released for each of the 646 Pokemon. The Bonsly evolutionary line set was released in January with the rest of the Johto and Hoenn Pokemon.

The only other charm promotion close to this magnitude was the 2009 promotion during the release of Pokemon Heart Gold and Soul Silver where the first 251 Pokemon were made into charms, so I think it's Bonsly's first charm like this.

Size: 1.5in / 3cm
This might be from some sort of Japanese gashapon set of cellphone straps, possibly from a promotion for the 8th movie, but I'm not certain. They seem difficult to find and the set features 4 others: Mime Jr., Weavile, Mudkip, and Torchic. It's a beautiful strap made of translucent plastic outlined with metal.

It was given to me as a Christmas gift by the member puyro on the Pokemon Collectors community, and I'm so thankful. <3

Maker: Pokemon
Center
Size: 7in / 17.5cm
Year: 2005
_
Pokemon Center pencils featuring Bonsly, among others. I was very grateful to get the packaging with them! The cardboard insert is so cute.

Maker: Pokemon Center
Size: 2.5in / 6.5cm
Year: 2011
A card sleeve for Pokemon or other standard-sized trading cards, featuring the promotional artwork from the opening of the Pokemon Center in Tohoku!

Why is this in the Bonsly section, you ask? Click the image for a larger size and look between Audino and Spinda. :) This artwork is adorable and does indeed have a teeny tiny Bonsly, but because he's so small I've decided to only get this sleeve at this point in time.

Maker: Edibas
Size: 3.5in / 9cm
Year: 2006
This is a German card from a company called Edibas. I don't know much about them, but the cards they make seem to be for purely collectible purposes. It's very well made, and the colours are very nice. I was pleasantly surprised when I got it. C:

Size: 2.5x3.5in / 6x9cm
I think this is called a supporter card? Something like that. I just know when I found it randomly and saw it had Bonsly on it I just about died. Cutest artwork! I'm so happy to own it. I've wanted it for ages.

Size: 1in / 3cm
I'm not sure what kind of promotion they had for Pokemon stamps, but I'm happy to have the Bonsly one! It's so adorable, and in perfect mint condition.

Size: 0.5in / 1.5cm
Apparently rare Bonsly stickers from a Japanese McDonalds promotion around the Diamond and Pearl era. Happy Bonsly is happy!

Size: 1.5in / 3cm
Made by ushigofasweet
A very cute custom clay charm I commissioned. c: I love how it came out. It has a super adorable face and it's so tiny! <3 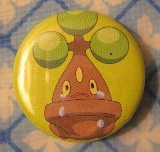 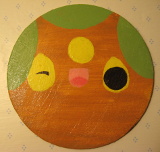 Size: 4in / 10cm
Made by Cinibunny
This is a drink coaster made as part of a Christmas gift for me, along with a Politoed coaster. He is adorable and so happy to have a cup planted on his face.