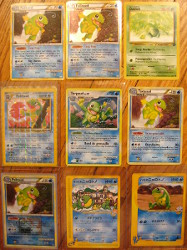 Size: 2.5x3.5in / 6x9cm
The few Politoed TCG I own. The first two in the top row are fakes, and the third in the top row is an Oddish, yes, but if you look closely you can see a frog beside it that looks kind of green and yellow. Close enough for me! cx

I'm excited to have some foreign language cards now. How cute is "Tarpaud?"

Maker: Pokemon Center
Size: 1.5in / 4cm
(sticker only)
Year: 2010
Pokemon Time is a promotional line the Pokemon Center releases approximately once a year that features a handful of different Pokemon each time. The products released can range from stationery to computer accessories. It's a popular line for giving unique art and products to Pokemon often overlooked.

An adorable sticker! Mine is completely MIP and while I'm curious to see how it's stuck to the backing, I can't bear to open it (and this is a rare occurence for me since I open EVERYTHING). Politoed as well as the designs around him are all individual stickers, and they're slightly puffy. The colours are very vibrant and glittery! So pretty to look at in person.

Maker: Pokemon Center
Size: 4in / 10.5cm
Year: 2005
This mini clearfile is from a special Pokemon Center promotion that I sadly don't know the name of. There are various items with this image on them, including a tin and small paper bag, and I really hope to get them all. This clearfile contains three dividers, each of which also doubles as a sticker sheet, and has a Politoed sticker on one (seen in the right image). Score! 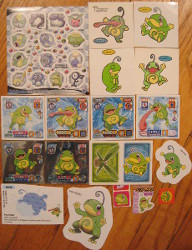 All kinds of various stickers. Pan stickers, amada stickers, Pokedex booklet stickers, and more. When I have more of each specific sticker type I might separate them into sections in order to provide more information. 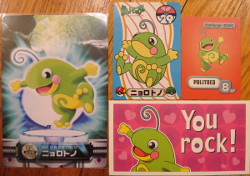 Miscellaneous cards and flats I have so far. I'm not sure what the card on the left is exactly, but it's pretty! The upper middle card is a Banpresto trivia card of some kind, while the flat beside it is a card from a Gold and Silver board game type thing. The bottommost flat is a Valentine card. (Where were these when I was in elementary school?!)