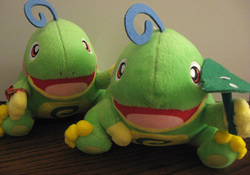 Maker: Banpresto
Size: 5in / 13cm
(excl. hair curl)
Year: 2006
Banpresto manufactured UFO plush can be found in crane game machines in Japan for a limited time. These were released in 2006 and are the second Politoed plush ever made (to my knowledge).

The one on the left is affectionately named Noritono the Happytoed, Nori for short, and he's a loved little boy. He came without a leaf, had his hand cut away from his tummy as well as his UFO string removed, and has gently loved fabric, but he's actually in very good condition. He's perfect for me to hug without worries. The one on the right is mint without hang tag, bought for completion's sake. Her name is Mara and she's very soft! Don't they make a cute couple?

Click the image to see a larger one that includes photos of the hang tag! 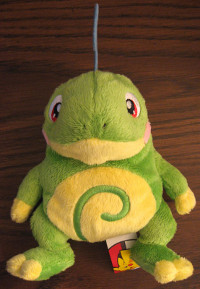 Maker: Jakks Pacific
Size: 6in / 14.5cm
(excl. hair curl)
Year: 2010
Jakks Pacific are an American company whose products are commonly sold through Toys"R"Us and Walmart. Distributed in 2010 after the release of Pokemon Heart Gold and Soul Silver, this is Politoed's most common plush.

This was a gift from a very kind member of Pokemon Collectors who no longer wanted him and knew I'd take good care of him in her place. <3 He's so soft! He still has his tush tag, but no hang tag. I'm on the lookout for that. 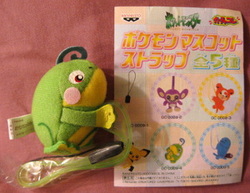 Maker: Banpresto
Size: 2in / 5cm
(excl. strap)
Year: 2000
The first Politoed plush made, and easily the rarest. I had no idea this existed until a community member received the Wobbuffet in a lot with the insert and let me know it had Politoed on it. Judging by the reactions of others, this plush was pretty much undiscovered until that point. I was so excited to actually find it!

All I really know is they seem to have been a capsule toy of some kind, judging by the paper insert, and that they came packaged inside a large, clear Pokeball. I consider myself very lucky to have this. It's so cute ♥