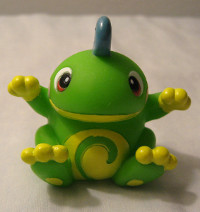 Maker: Bandai
Size: 2in / 5cm
Year: 2000
Kids are a series of hollow finger puppet figures made of soft vinyl that are sold in Japan with candy and a sticker. There's one for every Pokemon and are a very popular collection item due to their abundance, price, and lightweight material.

These figures are really adorable and that makes them really addicting! Politoed's pose is so cute and he's so chubby. This was the first Politoed item I ever held in my hands and it's very special to me. 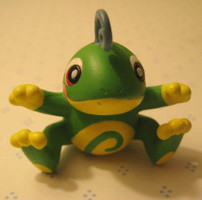 Maker: TOMY
Size: 2in / 5cm
Takara TOMY are the makers of a popular line of Pokemon figures called Monster Collection figures — MC figures for short, or more commonly called only "TOMY" figures. There was one made for almost every Pokemon from Generation I through IV, and figures for Generation V are in the making. They were sold all over the world, including America, but their popularity here has died down considerably. TOMY figures are also one of the most popular lines to bootleg, unfortunately, so you really have to pay attention before you purchase them!

Johto era figures are especially difficult to get a hold of, but patience paid off when I found this fellow after accidentally purchasing a bootleg. He's so cute. 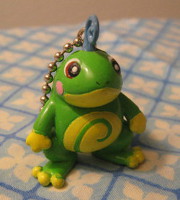 Maker: TOMY
Size: 1.5in / 4.5cm
This little cutie is a TOMY figure keychain. I don't know too much about the line, but I believe most if not all of Generation I and II Pokemon had one of these. They're essentially differently posed TOMY figures on a ball chain. The more obscure Pokemon, such as Politoed, are very hard to find!

I was extremely lucky to get this one from a member on Pokemon Collectors — just in time for my birthday, too! He's in really nice condition aside from some scratches on his back. He's so cute! 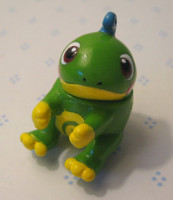 Maker: Banpresto
Size: 1.5in / 3.5cm
Year: 2001
Mini Clip or "grabby" figures are a rare line of figures manufactured by Banpresto. The estimated release year is the primary factor in their rarity; much of the Johto era merchandise from the early 2000s is very hard to find. There are over a dozen other known figures from this series and they're made of a firm, rubbery material. You can squeeze their sides and they will spread their arms so you can "clip" them onto things. (It doesn't work all that well though. XD) Some of the figures in the line have heads that can be turned, and in those cases the heads are actually removable. They have a number stamped into their necks, which I assume is the figure's number in the set. Politoed is 5.

This is easily one of the highlights of my Politoed collection. I was incredibly lucky to have a community member looking out for me. She linked me to a small figure lot on Y!J with this fellow and I managed to win it for a great price. No regrets. It has the cutest face ever. ;o; 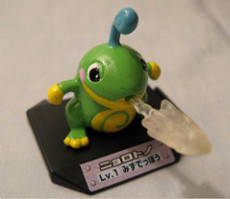 Maker: Bandai
Size: 1.5in / 3.5cm
(incl. base)
Year: 2000-2001
The Battle Museum series from Bandai is made up of figures in attack poses on black bases that can connect together, allowing you to line up rows of Pokemon. They come with stickers for the base, which display basic information (in Japanese) about the Pokemon, such as its name and type. They were distributed from January 2000 to February 2001.

Politoed is featured using a Water Gun attack! It's so cute. This was one of the last figures I knew about that I needed and it's really satisfying to finally own it. It's so dynamic, and really rare to not see Politoed carefree and smiling. :) 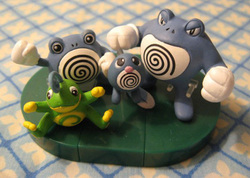 Maker: Yujin China
Size: 1.5in / 4cm
(base to top of Poliwrath)
Pokemon Zukan figures (Japanese for "encyclopedia") are available randomly as capsule toys in gashapon machines. They're a set of 1/40 scale figures, based on the Pokedex, from the same evolutionary line and displayed on a base, often with clear pegs to hold them in place.

This is incredibly cute and I love the poses. Politoed's zukan piece has no peg though, so he kinda just sits amongst the others. It makes me worry he'll fall off and get lost one day. :D; 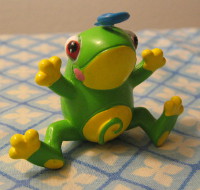 Size: 1.5in / 4.5cm
This figure is a bootleg based off of the official TOMY figure mold, which you can tell by comparing the poses. It has a much too pointed face when compared to the official TOMY, along with the belly swirl and eyes being embossed when they should be only paint details, and the hair curl on its head looks like it's been flattened (it was molded this way; it's not broken). Some paint is also misaligned and there are bubbles in the yellow around the stomach, all flaws an official figure would not have. Nonetheless, it's homage to Politoed and I was fortunate enough to find a well-painted one (though getting it in the first place was an accident).

Maker: Pokemon Center
Size: 1.5in / 4.5cm
(figure only)
Year: 2010
Pokemon Time is a promotional line the Pokemon Center releases approximately once a year that features a handful of different Pokemon each time. The products released can range from stationery to computer accessories. It's a popular line for giving unique art and products to Pokemon often overlooked.

Politoed was featured in 2010, and the art for his products is literally made of cute. It's cuteness right down to an atomic level. I love it. This is a cell phone strap, one of the items just about every Pokemon receives each promotion.