Stunky was yet another random, sudden love. Never having played Diamond and Pearl until 2012, I didn't get to experience it and find new Pokemon loves until years after the fact. Stunky has a chubby face and stubby limbs (are you seeing a pattern with me yet?) and who doesn't love those Garfield eyes? The UFO plush completely sealed the deal. 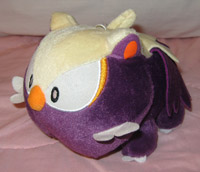 Maker: Banpresto
Size: 5in / 12cm
Year: 2007
_
Banpresto UFO plush can only be found in crane game machines in Japan for a limited time.

I'm so thrilled to own one of these. I fell head over heels for poor Stunky's only plush and had to have one. Actually, I could barely sleep that night after I found out about it because I wanted it so desperately. (So I stayed up late stalking eBay instead.) He's a lot fatter than I expected, which just adds to the super cute factor. I love his chubby face! I made a pair of glasses for mine and named him Shakespeare. He lives on my bookshelf, where he can devote all his time to reading.

Maker: Bandai
Size: 1.5in / 4cm
Year: 2007
Kids are a series of hollow finger puppet figures made of soft vinyl and sold in Japan with candy and a sticker.

One of three Stunky Kids (one being a clear variant), and a Skuntank Kid. I'm not all that fond of Skuntank so I won't get his merch myself, but this one was a gift and he looks great with Stunky. :D

Maker: Pokemon
Center
Size: 1.5in / 4cm
Year: 2011-2012
This charm is from the promotion the Pokemon Center held from December 2011 to February 2012, which featured a brand new charm released for each of the 646 Pokemon. The Tympole set was released in December with the rest of the Sinnoh Pokemon.

Unlike my other charms, I got this after release, in July 2012. I was trying to resist getting too many charms in the excitement, but ended up caving in later and wanting Stunky and Gible. :) Hey, at least they're cheaper after the fact. XD

Size: 5in / 13cm
A probably bootleg sticker sheet, prominently featuring Pikachu but also with some other cuties — liiike Stunky! It was cute, I couldn't resist.