Wobbuffet is one that took a while to grow on me. Originally I just got a few things here and there for my boyfriend since it's his favourite Pokemon, but I inevitably fell in love with it myself. It's so cute and blobby. XD So we now co-own a steadily growing Wobbuffet collection, meaning some are at his house and some are at mine.

Maker: Jakks Pacific
Size: 5.5in / 13.5cm
Year: 2007
Jakks Pacific are an American company whose products are commonly sold through Toys"R"Us and other stores.

Wobbuffet was released in 2007, according to his tush tag. He's in good condition, albeit somewhat loved. I enjoy grabbing his little arms and playing with his tail. :P

Maker: Jakks Pacific
Size: 3.5in / 9cm
Year: 2009
Jakks Pacific are an American company whose products are commonly sold through Toys"R"Us and other stores. They also make this sort of "sub-series" of plush called Throw Ball plush, which are essentially smaller replicas of their regular line of Pokemon plush. They come packaged with a Pokeball that you can put the plush inside and supposedly throw it to release the plush. (Never seen the Pokeball myself so I don't know the mechanism or if it works well.)

This is a pretty hard plush to get your hands on! I was able to get this through a very lovely friend who was willing to give it up. :D He's so tiny and cute!!

Maker: Banpresto
Size: 2in / 5cm
(excl. strap)
Year: 2000
This is quite a rarity, to my knowledge, and I really don't know much about it except that it has to have been a capsule machine toy. It came with a paper insert that showed the other straps in the set containing Pichu, Aipom, Teddiursa, and Politoed. I've never seen the Politoed before and it's my highest want! I hope to find it one day soon. 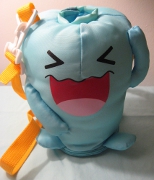 Maker: Banpresto
Size: 7.5in / 19cm
Year: 2006
I'm not sure where this came from, but Wobbuffet is from a set that also includes Pikachu and Mew. The inside of the hang tag says it's a prize of some kind, and I've been told a mint one is quite rare. Either way, he's very cute and very happy to go on a trip with you while holding your hydrating liquid of choice! :) 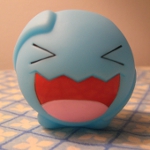 Maker: Bandai
Size: 2in / 5cm
Year: 2005
Bound Balls are hollow squishy balls made of what feels like a similar material to Kid figures, except much more pliable. They were probably meant to be played with as bouncy balls, but they can also be used in a similar manner to a stress ball. They were available in capsule machines, and only certain Pokemon from Generation I and II seem to have a Bound Ball.

Maker: McD. Corp.?
Size: 3in / 8cm
_
This is a Japanese McDonalds toy, though he's incomplete. He's supposed to come with a mini air pump you can squeeze to force air into a hole in his back, which I think makes him race forward. Cute! His tail wiggles. :)

Size: 1in / 2.5cm
Year: 2001
_
I don't know a lot about this little figure, but it certainly does seem to be a pencil topper. It fits nice and snug on my pencil crayons and the like. I can't find a brand on it.

Look at that grumpy face! Wobbuffet does not approve of your artwork. :T

No idea what this is! I sent it off to my boyfriend before measuring it and I can't remember what it said on the back. If you have any information on it then please let me know~ 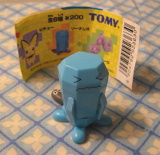 Maker: TOMY
Size: 1.5in / 4cm
_
This figure is from a set of 6 different gashapon toys that also feature Pichu (which I also have, for my boyfriend), Pikachu, Meowth, Charizard, and Onyx. All of them were made in a blocky, somewhat Lego-like style. Why? I'm really not sure. But it's cute! All of them are at least somewhat posable, with rubber limbs while the rest of their bodies are hard plastic. This Wobbuffet came mint in its plastuc capsule, which was cool.

Maker: Bandai
Size: 1.5in / 3.5cm
(incl. base)
Year: 2000-2001
_
The Battle Museum series from Bandai is made up of figures in attack poses on black bases that can connect together, allowing you to line up rows of Pokemon. They come with stickers for the base, which display basic information (in Japanese) about the Pokemon, such as its name and type. They were distributed from January 2000 to February 2001.

I got this Wobbuffet from a trade on the Pokemon Collectors community. His attack is Mirror Coat, which I guess is a mental attack requiring no special pose. XD

Maker: TOMY
Size: 1.5in / 3cm
Year: 2003-2005
_
Chocoball (or Ball Choco) figures are small Pokemon toys that come packaged inside a hollow chocolate Pokeball, similar to a Kinder Surprise, if you're familiar with those. They feature Pokemon in dynamic poses with detailed bases that have an indent or groove in the shape of the Pokemon's footprint. For this reason they're also often called footprint figures.

I'm... not sure what Wobbuffet's base actually is. To be honest, I think it looks like the wreckage of a house or the remains of a campfire. I also think he might've been glued to his base, 'cause I can't get him off. :T

Size: 1.5in / 4cm
Year: 2006
This is a European exclusive figure similar to the Chocoball Figures, though it was packaged with candy instead of inside chocolate. Both candy and toy were sealed in a Pokeball of various colours along with a paper insert showing the rest of the figures in the series.
(Thank you for the information, lulupin!) 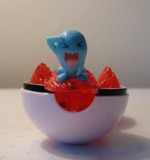 Maker: Jakks China
Size: 2in / 5cm (Pokeball)
1in / 2cm (figure only)
Year: 2009
Honestly can't really say what this is, but it's really cute and fun! I like it when the Pokeball is closed because it's a perfect sphere, aside from the hinge at the back. Push the button in the middle of the Pokeball and it makes a winding sort of sound, and then Wobbuffet pops out very suddenly! It startles everyone, haha. 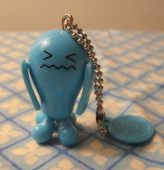 Size: 2in / 4.5cm
I can't find any identification on this little guy so I have no idea what he is, besides a keychain of sorts. He's got a few markings that won't come off but he's still super cute. The feet, arms, and tail are all jointed and can be moved around. So much fun! 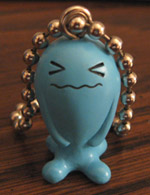 Size: 1in / 3cm
This Wobbuffet figure was part of a pair keychain set from a gashapon machine. He was originally accompanied by a Meowth, but this one was received by himself. His tail is curved slightly to the side, which is really cute!

This is another figure I sent to my boyfriend without measuring. It's a Christmas charm from a promotion a few years back and has a bell attached to the bottom. The clasp isn't the original one it came with since it, uh, had a run in with my dog. I was not happy. It came out okay other than a broken clasp, though, which I replaced with a necklace clasp. 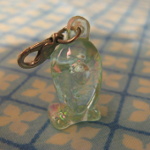 Maker: TOMY?
Size: 1in / 3cm
Year: 2000
_
I think this might be made by TOMY, just from the markings on the back, though it doesn't actually say TOMY anywhere. I really don't know anything other than it's shiny, pretty, and a charm. It's made of plastic and has some minor markings on the body so one of its previous owners may have used it, but it's still in good condition. I know there's also a Cyndaquil charm in a similar style. It's hard to see Wobbuffet's face in photos but it's somewhat more visible in the full size image.

Maker: Pokemon
Center
Size: 1in / 2.5cm
(excl. clasp)
Year: 2011-2012
_
This charm is from the promotion the Pokemon Center held from December 2011 to February 2012, which featured a brand new charm released for each of the 646 Pokemon. The Wobbuffet evolutionary line set was released in January along with the rest of the Johto and Hoenn Pokemon.

Wobbuffet was also made into a similar charm for the previous large scale charm promotion during 2009 for the release of Pokemon Heart Gold and Soul Silver, in which all of the first 251 Pokemon were made into charms.

Maker: e-max
Size: 2in / 5cm
Year: 2006
This is from a series of 150 dog tag-style metal tags featuring some of the more popular Pokemon from the first generation through to the fourth generation. They display each Pokemon's name on the front along with their image, and then their Pokedex number, height, and weight on the back. They were released in 2006 and distributed by e-max, a European company. They seem to have been blind packaged in wrappers that contained 2 tags and 1 ball chain. They're rather hard to find now.

I added the ball chain to this one from another keychain so it's not the original.

Size: 1in / 2.5cm
_
A pin made by someone I unfortunately don't know! But it's really cute, albeit small. I keep it on my messenger bag with my other pins.