This page is for the miscellaneous toys I have in my collection. Some are things I've had since childhood that I just can't get myself to part with, and some are random purchases that tickled my fancy! 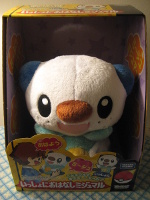 This is the Talk Together Mijumaru, or Isshoni Ohanashi Mijumaru. If you're unfamiliar with it, "Mijumaru" is Oshawott's Japanese name. This plush was released along with the other two Unova starters and Pikachu.

What's unique about it is that it has a sound activated voice box inside and the plush will respond with one of 15 different responses when you speak to it. All of them are its name, but spoken with different emotions and emphasis. It really sounds alive. On top of that, it is incredibly adorable, and the softest plush I've ever felt, right alongside my Tympole Pokedoll. He's sooo huggable! I've named mine Prince Revolver Sherwat Miju. (Yes, I promise there's a story behind that.) My mom got it for me for Christmas in December 2011, though it didn't show up until January 2012. 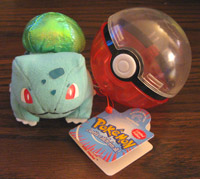 Maker: Applause Inc.
Size: 3in / 7cm
Year: 1998
_
Applause plush are an old series of plush from the late 1990s during Pokemon's peak. They're easily identifiable by the shiny fabric used on some part of each plush's body (in Bulbasaur's case, his bulb). 33 of the original 150 Pokemon got an Applause plush.

They're really adorable little things. This Bulbasaur in particular is very fat, which I love. XD I bought him from a lot of used toys in August 2011, and despite that description he is in absolutely perfect condition. His Pokeball is a little scuffed, however, but he stays outside of it anyway. 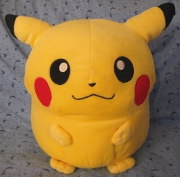 Maker: Banpresto
Size: 12in / 30cm
(incl. ears)
Year: 2007
I don't really know much about Banpresto's large sized "Deluxe" plush though, aside from the fact that they're often very cute.

This is the only Pikachu plush (so far) that I haven't been able to resist acquiring since joining Pokemon Collectors in 2011. He is HUGE and his cuteness is overwhelming. He's so cuddly, and because of that I've named him Cuddles in honour of my Pikachu in my very first play through of Pokemon Yellow when I was 12. 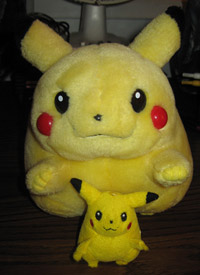 Maker: Play By Play
Unknown
Size: 8.5in / 22cm
3in / 8cm
Toys from my childhood. A small sized Pikachu backpack with its straps and tush tag cut off, which I used for storing my small Pokemon figures. It's by the Canadian company Play By Play. I remember there being a larger backpack that otherwise looked exactly the same, but I only ever got the small one.

I unfortunately have no idea where the small plush is from, and it's quite loved as well as completely tagless. Both of these are very old, probably dating back to around 2000. 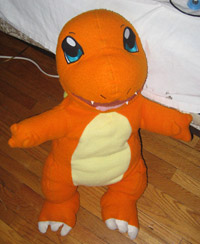 Size: 26in / 66cm
I still haven't found out too much information about this line, other than some other pillow plush include Hoothoot, Snubbull, Charizard, Dragonite, and Meowth. Mine was bought at a thrift shop when I was young, possibly around the year 1999-2000, with no tags but in wonderful condition. It spent a lot of time in storage and its fabric is pilled, but it's still gorgeous and huggable. I love his eyes the best.

Maker: Play-By-Play
Size: 7in / 18cm
Year: 2000
This was a very sweet surprise gift from lady_joan! It made me so happy to see him in the box when I opened it up. He's so cute, and I love his big hands. I love to carry him around by his hand like I would have as a child. There's cardboard in his feet so if you adjust him just right, he can stand up on his own. So cute. :D

Maker: Pokemon Center
Size: 3in / 8cm
Year: 2009
Pokedolls are a unique line of small Pokemon plush distributed in both Asia and America. Their "chibi-fied" design is massively popular and there have been many Pokedolls made for many Pokemon. There are minor differences between the Japanese and U.S. releases, leading many completionist collectors to get one of each different release.

This fellow's pretty random, I'll admit, since I don't like Metagross normally. But I love adorable grumpy things, and the Metagross 'doll fits that bill to a T! I was fortunate enough to get him from an Epcot pickup through the comm. :D

Maker: Hasbro
Size: 6in / 15cm
(excl. head fin)
I don't know much about this line of Hasbro plush, but this fellow is larger than the old second generation ones I have. He's also made of a super fuzzy material, very different from the smooth fabric of the others. I love Mudkip, and this plush is really cute with his faceplanting tendencies and floppy fins. I couldn't resist having him.

Maker: Hasbro
Size: 5in / 12cm
5.5in / 13.5cm
I remember these being very common when I was little. I cut the tags off so I'm not sure the year they were made, but I know they're Hasbro plushes and Marill has some beans in its bottom. Both Marill and Bellossom were some of my favourite Pokemon as a child after Gen II came out, though that said I pretty much asked my parents for ANYTHING Pokemon so whether I liked them or not didn't matter. XD

Maker: Kaiyodo
Size: 2in / 5cm
Year: 2011
Bottlecap figures have various origins, but I believe this one in particular came packaged with and Oshawott-themed TCG tin and deck. Could be wrong though!

Sue me, I like Mijus. I'm desperately trying not to have a mini collection of him, but this figure was really cute and I love Kaiyodo's dynamic molds so I caved. 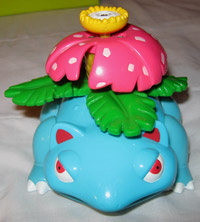 Maker: Hasbro
Size: 4in / 9.5cm
Year: 2000
_
This is an older figure from a set of "battle" or "action" figures by Hasbro. The original 3 starters each got one of these figures, though I'm not sure who else (if any at all). They're unique in that they can perform an attack. One of Venusaur's leaves is attached to a string and can be pulled away from his body, to use Vine Whip. If you press down on the yellow part of the flower on top of his back, the red part will spin and retract the leaf back into its original position. This was one of my most favourite toys as a child and single-handedly made me love Venusaur. 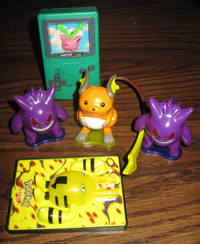 I've since given away one of the Gengars. 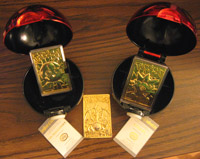 Maker: Alcone Marketing Group
Size: 2.5in / 6.5cm (card)
3.5in / 9cm (Pokeball)
Year: 1999
_
These are 23 karat gold-plated Pokemon cards that came with certificates of authenticty and a metallic-looking (but plastic) Pokeball display case, sold at the fast food chain Burger King in 1999. A picture of a Pokemon is embossed on the front, while a dynamic scene of the same Pokemon is embossed on the back along with Pokedex entry text beneath it, as well as the names of the Pokemon's evolutions and what level they evolve at. There were 6 cards total in the set: Pikachu, Poliwhirl, Jigglypuff, Charizard, Togepi, and Mewtwo.

My Jigglypuff's Pokeball is missing one piece that supports the card, but Togepi is perfect. Both still have their certificates of authenticity. The one in the middle is a very beat up Charizard card I found in a thrift shop without the Pokeball. I got all of mine during their release.

Maker: McDonalds
Size: 2.5in / 6cm
Year: 2009
_
A Pikachu water squirter McDonalds toy from the Philippines that I got as a freebie in July of 2011. He's grumpy looking. XD 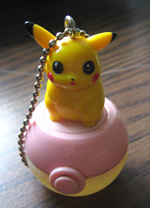 Maker: OddzOn Inc.
Size: 2.5in / 6cm
Year: 1999
_
I've had this since my childhood. It's a Pikachu keychain attached to a pink Pokeball filled with bubble soap. The top of the Pokeball twists off and the bottom half contains the bubble soap. It came with a regular pink bubble wand (I think) but it's long since been lost. The soap is still sealed. No idea where it came from!

Maker: TOMY
Size: 4in / 10cm
Year: 1998
_
Deluxe TOMY figures (also kown as DX TOMYs or Giant TOMYs) are similar to their smaller Monster Collection counterparts, but made of hollow plastic and with moveable limbs. Some of these are pretty rare nowadays.

I've had these forever and they're in loved condition with several small marks, and Togepi has a dent in his side from being in storage. I loved them so much as a kid.

Maker: TOMY
Size: 1.5 - 2in / 3.5 - 5.5cm
_
Takara TOMY are the makers of a popular line of Pokemon figures called Monster Collection figures — MC figures for short, or more commonly called only "TOMY" figures. There was one made for nearly every Pokemon from Generation I through IV, and figures for Generation V are in the making. They were sold all over the world, including America, but their popularity here has died down considerably. TOMY figures are also one of the most popular lines to bootleg, unfortunatly, so you really have to pay attention before you purchase them!

Venusaur and Mudkip here were purchased in July of 2011, but the rest are from my childhood. They're not dated but I hazard a guess at their release years being around 1998-2001 (in the case of Mudkip).

Size: 2in / 5cm
Capsule toys from various linking sets out of the capsule machine at a local Walmart store around 2008. Once upon a time I had a Turtwig, which I traded for the Pikachu, then promptly regretted doing. Currently on the hunt for a replacement 'twig. 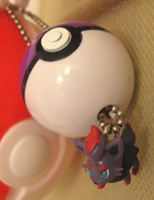 Maker: T-Arts
Size: .5in / 2cm (Zorua)
1in / 3cm (Pokeball)
Year: 2010
_
An "Open Pokeball" keychain with a tiny Zorua figure attached to a Master Ball. The two halves of the Master Ball come apart and you can put the Zorua inside.

Gotten as a gift from a sweet member of Pokemon Collectors, lady_miriya, in September of 2011. It was my first bit of Gen V merch. That little Zorua is one of the cutest things ever! 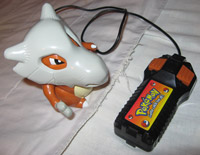 Maker: TOMY
Size: 3.5in / 9cm
Year: 1999
_
Another fellow from my childhood. I'm guessing at the year but I think it's accurate, or at least close to. TOMY released a set of remote control Pokemon figures that do different things as they're moved. When Cubone goes forward his head bobs and he raises his arms up and down, and when he moves backward he kind of sways but his head and arms remain still. I was never a fan of Cubone, but I really loved this toy. 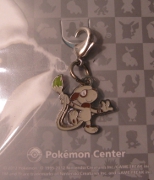 Maker: Pokemon Center
Size: 1.5in / 4cm (incl. clasp)
Year: 2011-2012
This charm is from the promotion the Pokemon Center held from December 2011 to February 2012, which featured a brand new charm released for each of the 646 Pokemon. Smeargle was released in January along with the rest of the Johto and Hoenn Pokemon.

I got this as a gift for my boyfriend since he really likes Smeargle. 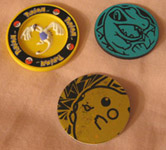 Size: 1in / 3cm
Aside from Pokemon and frogs, I've had a (very casual) coin collection for quite a long time. I thought I'd seriously collect Pokemon coins, but then I realized exactly how many there were and backed off very quickly. XD

I've had the Lugia movie coin since Pokemon: The Movie 2000 came out (it came with the VHS), and I got the other two around August and September of 2011. The Pikachu looks dirty in the photo but it's not really.

Custom Cleffa Plush by me

Size: 9.5in / 25cm
Made by me
A shiny Cleffa plush that I made for myself after hatching a shiny Cleffa in my Pokemon White game. All sewn and embroidered by hand. Not the most professional work, but she was my second attempt at a real plushie.

Custom Jigglypuff Plush by my mom 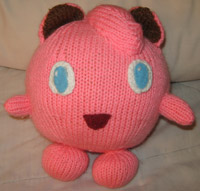 Size: 9.5in / 24cm
Made by my mom
A knitted Jigglypuff plush made for me by my mom sometime around 1999-2000. She got a pattern book at the height of Pokemon's popularity and it had a Jigglypuff pattern in it, so she offered to make it for me.