I've never played Diamond or Pearl until 2012 so I had no opinion of the starters — until Pokemon gashapon machines invaded my local Walmart. I tried my luck and got a Turtwig, which I foolishly traded away. I ended up falling in love with him that fateful day and I'll never be the same until I get that capsule toy back.

I refuse to collect a starter because just the thought of that hurts, so I decided to allow myself a mini collection. There were a set number of items I decided would be my full Turtwig collection, but I also occasionally pick up random items or get them as gifts. :)

The only items I'm missing are the DX Pokedoll, one Kid, and a capsule toy. 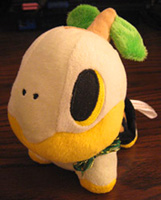 Size: 5in / 12cm
Pokedolls are a unique line of small Pokemon plush distributed in both Asia and America. Their "chibi-fied" design is massively popular and there have been many Pokedolls made for many Pokemon.

This, however, is a fake (or "bootleg"), meaning it was not made by any official Pokemon companies and they didn't get any money for this plush's existence. Listing a comany and year seems pointless on a bootleg. XD

He's still made of minky, and even though he's not official I think he's adorable and I love him so much. I tied a green ribbon around his neck and named him Nathaniel Cutetwig (Nate for short). He is the most sophisticated (and silly) Turtwig you will ever meet. He enjoys tea in floral patterned cups and has a weakness for sweets. I like to take him with me when I go places.

Maker: Banpresto
Size: 6.5in / 16cm
Year: 2008
Banpresto UFO plush can only be found in crane game machines in Japan for a limited time.

I wanted this plush since I laid eyes on it. His big, round head is just perfect! Though mine has a very large and heavy head, and as a result he couldn't stand up by himself to save his little inanimate life (thus the Kid for support). 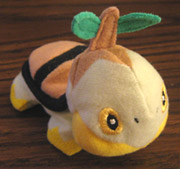 Maker: Jakks Pacific
Size: 3in / 7cm
Jakks Pacific are an American company whose products are commonly sold through Toys"R"Us and other stores. They also make this sort of "sub-series" of plush called Throw Ball plush, which are essentially smaller replicas of their regular line of Pokemon plush. They come packaged with a Pokeball that you can put the plush inside and supposedly throw it to release the plush. (Never seen the Pokeball myself so I don't know the mechanism or if it works well.)

Little Turtwig here is in pretty good condition but he has no tush tag. These plush aren't stuffed very much so his head often sags forward. XD So cute.

Maker: Bandai
Size: 1.5in / 4cm
Year: 2006
Kids are a series of hollow finger puppet figures made of soft vinyl and sold in Japan with candy and a sticker.

Turtwig, being a starter, has several Kid variants, but there's only one other aside from these two I'm really interested in getting.

Maker: Kaiyodo
Size: 2in / 5.5cm
Year: 2007
TFG figures are Pokemon figures affixed to a spinning base that are used as game pieces in the Pokemon Trading Figure board game. The figures are very popular amongst collectors for the detailed sculpting and dynamic poses.

I had to get a Turtwig TFG because of those adorable chubby cheeks! 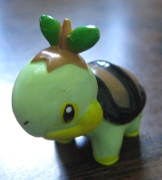 Size: 1in / 3cm
Year: 2008
This is a European pencil topper figure. They were random toys packaged inside a hollow chocolate ball, similar to a Kinder Surprise. Other figures included in the set are Budew, Mime Jr., Piplup, Chimchar, Bonsly, Happiny, Munchlax, Chingling, Manaphy, and two different Pikachus.
(Thank you for the information, lulupin!)

This cutie was a surprise freebie from hebitheivan. <3