Maker: Pokemon Center
Size: 1.5in / 4cm
(incl. clasp)
Year: 2009
This charm is from the Heart Gold and Soul Silver promotion in 2009, when the Pokemon Center released a charm for each of the first 251 Pokemon in celebration of the Generation II game remakes. It features Politoed's Dream World artwork, which is a refreshing change from its previous official art. It is tiny, detailed, and incredibly gorgeous!

This was given to me by the very kind darkangellilith from the Pokemon Collectors community. It was the first Politoed item I'd ever purchased or been given (though my Politoed Kid figure was the first I ever received and held in my hands) so it's dear to me. <3

Maker: Pokemon Center
Size: 1.5in / 4cm
(incl. clasp)
Year: 2011
Similar to the above, this charm is from the promotion the Pokemon Center held from December 2011 to February 2012, this time featuring a charm for all 646 Pokemon (wow!). The Poli evolutionary line set was released in December with the rest of the Kanto Pokemon.

Think it looks exactly like the 2009 charm? Think again! While it is an almost exact duplicate, I discovered the 2011 charm boasts a slightly longer hair curl. It's also a darker shade of green and is flatter than the 2009 charm, which has a very slight dome shape. These differences may not be easily noticeable in these particular photos, but trust me. I spent way too long staring at them. XD 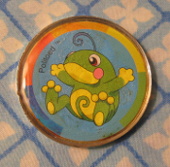 Size: 1.5in / 3.5cm
Year: 2001
I'm not too certain on the backstory of this coin, but I believe it may have been a Europe exclusive during the release of the original Gold and Silver games based on the date.

This thing is heavy! Mine has some markings and age wear, but it's not terrible overall. It's a cute item to have. 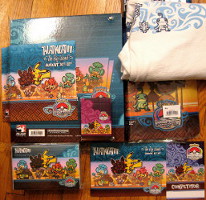 Year: 2012
Every year the Pokemon world championships is held it features promotional artwork specific to that year, which always has Pikachu but sometimes includes other Pokemon. Imagine my surprise when, in August 2012, they released that year's art and a tiny Politoed snuck its way on there! A member of the community was kind enough to pick up everything she could for me during her trip there.

There... is a lot of stuff here. The merchandise I got direct from Worlds is a screen cleaner, card binder, white T-shirt, play mat, and deck box. Later on they released card decks based on the competition winners' decks and I got a second, smaller deck box in purple from there, along with a pamphlet on Worlds 2012. I was able to get an unused competitor name badge from eBay. Not pictured is a sheet from the notebook with art of Politoed in the corner. There are 3 more deck boxes and a black shirt, but I'm undecided about seeking them out. 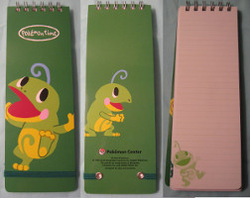 Maker: Pokemon Center
Size: 8in / 20cm
Year: 2010
Pokemon Time is a promotional line the Pokemon Center releases approximately once a year that features a handful of different Pokemon each time. The products released can range from stationery to computer accessories. It's a popular line for giving unique art and products to Pokemon often overlooked.

This is a decently sized and very adorable spiral-bound notepad. I really love the art and the hard covers. It's tempting to use it but getting duplicates for use isn't something I let myself do often.

Size: 16in / 40cm
Year: 2009
A lanyard with the Pokemon Heart Gold and Soul Silver logos on it, along with some official art of various Johto Pokemon (Politoed included!). I don't know much about this item but it's obviously something promotional for the HGSS game remakes. It's very beautiful and made of a sort of silky material.