I don't know why I started to like Gible, and I don't know when, but it just happened. He's fat and round(ish) with stubby limbs and I just. Adorable. My love became official when I started Masuda breeding Gibles for a shiny on my copy of Pokemon White. Boxes upon boxes of Gibles can do that to a person.

Like all my mini collections, this is very casual and I'll never own even close to all the things, but a few figures would be nice! 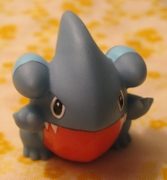 Maker: Bandai
Size: 2in / 5cm
Year: 2007
Kids are a series of hollow finger puppet figures made of soft vinyl and sold in Japan with candy and a sticker.

One of 4 Gible Kid figures, this is the standard and most common Kid. He is effing cute. My fingertip is like, four times the size of his bitty hands.

Maker: TOMY
Size: 2in / 4.5cm
Year: 2008
Takara TOMY are the makers of a popular line of Pokemon figures called Monster Collection figures — MC figures for short, or more commonly called only "TOMY" figures. There was one made for every Pokemon from Generation I through IV, and figures for Generation V are in the making. They were sold all over the world, including America, but their popularity here has died down considerably. TOMY figures are also one of the most popular lines to bootleg, unfortunately, so you really have to pay attention before you purchase them!

While this figure has a cute, dynamic pose, it makes his head really heavy and getting him to stand up properly is quite the task! I prefer closed-mouth Gible poses since he's fatter that way, but this is still a really cute figure. 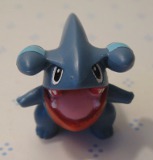 Maker: TOMY
Size: 1in / 2.5cm
Year: 2008?
Chupa Surprise figures are small toys that come packaged with a ChupaChups brand lollipop, which are encased together in a plastic Pokeball of varying types (including Master Balls, among others).

This figure is almost identical to the TOMY MC figure, but very tiny! It's so cute.

Maker: TOMY
Size: 1.5in / 3cm
Year: 2010
A metal keychain from one of the promotions for the 13th Pokemon movie. It's very heavy, and has a Pokeball outlined on the back. The side with Gible is very pretty! It's a really lovely keychain overall.

Size: 2.5x3.5in / 6x9cm
A reverse holo Gible card from who-knows-what set. (I really don't know TCG.) It was a sweet freebie from the Gible collector extraordinaire, fizzycat. I love the art. So cute!